The following article was written, but submitted late for inclusion in the final edition of ‘The Paper’. I thought it was worth publishing here instead…

There was a time, not so long ago, when I had no knowledge of ‘Louisville’ – sure I’d heard of the Kentucky Derby, KFC is a household name across the globe and the brands of the Brown-Forman corporation accompany many a Friday night’s wind-down. But the city, found on this bend in the Ohio river, was all new to me.

I first heard of the city when I was asked if the photography group I help run would be willing to host a photographer. Once we’d discussed the ‘why’ – that Leeds, UK (my city) and Louisville were partner (sister) cities and that he wanted to come and work in our city – we quickly moved on to turning this into something more extensive – an exchange.

Upon arriving in the city I didn’t know what to expect. I’d seen what Hollywood and television had said about middle America – so I was more than a little trepid; with hints of Dorothy as she first arrived in Oz!

It was also my first big transatlantic adventure as an adult – so I was only too happy to be met by a friendly face (and hug) from Michael – who we’d hosted a few months earlier – when I arrived, late on a small jet at an otherwise empty airport.

From that moment on my fears seemed to quickly vanish. Michael’s family started this by warmly welcoming me (while giving me my own space) and my ease increased from there. Almost everyone I met made me feel like I’d just met a new friend and, in honesty, many are still good friends – I’ve more Facebook buddies in Louisville than in any city other than Leeds!

My visit to the city included the amazing Idea Festival, but I also took advantage of opportunities across the city meeting everyday people – students at Spalding University, photographers on a picnic in Bernheim Forest, residents around the Nulu area and those working in Home of the Innocents and around the Highlands – to name but a few.

I was based in the East Market district – just hitting the ‘trendy’ status it’s since embraced – but I worked to make contacts from around Louisville who could share their city with me – and the people of Leeds.  As I went I introduced myself and my mission – aiming to bring our cities a little closer together – creating a visual record of the trip by recording all those I met and paying to take those portraits with pin badges. On that first trip I gave away 200 pins, to a largely enthusiastic bunch of recipients (some much more enthusiastic than others). I also promoted a photography walk along Frankfort Avenue, and amazingly 20 photographers turned up at the meeting place and accompanied me.

How did this work for me? Well – I feel like an adopted son of the city; I’ve made friends for life – it’s rare a day goes by without me talking to one friend or another in the city. I loved it so much I came back the following year – shooting more portraits, running another photowalk (50 showed this time), an exhibition of the previous year’s images and delivering three talks – including a Pecha Kucha talk in an agricultural store!

But the question I set out to answer is – if this is a love letter to Louisville, then who is it written to? Well that has to be the people of Louisville – you’re a wonderful bunch! You have made me call your home my second city – if I was to choose to leave Leeds right now I know which city would be top of my list! You’re enthusiastic, open, friendly, welcoming, embrace challenges, love the arts and embrace other cultures, intrigued by the unusual and (most importantly) you almost never say ‘no’ to having your photograph taken!

Louisvillians – I love you and cannot wait til we meet again. 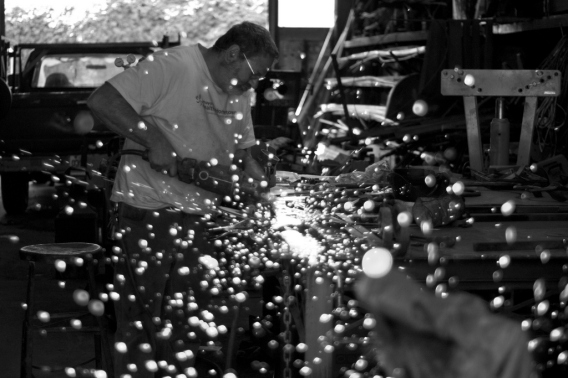 Seeing inside the Home of the Innocents was a wonderful experience – the great facilities and people that make up such a wonderful resource; such as Laura and Jordan. 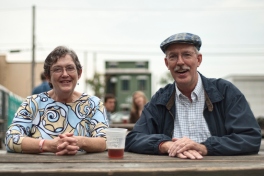 The friendly face of Louisville (and specifically Nulufest) wasn’t limited to younger generations – Frances and Randy spent a while (and shared their table) telling me about their Louisville – and asking about my life in Leeds.

One of the many amazing things I took away from IdeaFest was just how much it reached out to young people – and how engaged they were with it. Owen, Nora and Amanda were just an example of people I talked to who were inspired by the speakers – and fellow delegates.

Within hours of arriving I met with Bob and other members of the Louisville Photo-Forum in Bernheim Forest. They set the standard for a warm welcome; and introduced me to s’mores and Derby Pie. 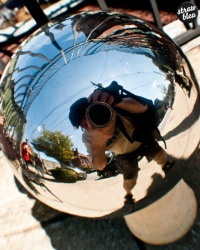 I shot this self portrait on the Nulufest Photo Walk I organised. Having run a photowalk the year before I knew I’d see a few friendly faces – but 50 took part. Amazing!

Laura is a power-house; driving small business, accounting guru and the genius behind Kluster – her own line of jewellery she also finds time to help drive the NuLu district forward; I met her as that year’s Nulufest organiser. I called her crazy 🙂

I’m not a sports fan – I was at school the last time I viewed a fixture – so it was somewhat a surprise when I really enjoyed getting in among the players of a high school football game (Manual v Seneca).

I am a digital professional, artist and all round good egg. Always looking at new and exciting interventions and communities for creative people. Current project: communications strategy for Leeds Creative Timebank. Previously: Exposure Leeds, Photocamp Leeds/Bradford, LSx (BarCamp Leeds, TEDx Leeds) and (We Are) Obscured View all posts by Jon